German police of Luebeck state the Luther Bible from 1634 was found during a search. The authorities, however, are not willing to share much more information since this leather bound book is considered evidence in an ongoing investigation.

Fact is: Experts have not seen this rare piece of Christian art for over 20 years. According to an imprint it was published by Stern’sche-Verlag in Lueneburg. Authorities also found a hand-written note on the inside cover. 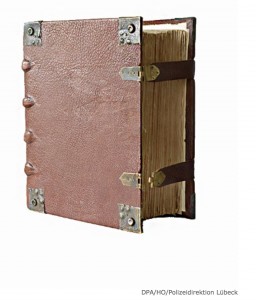 The owner is still unknown. Did art thieves steal the Bibel or was it just a coincidence it was at the scene? Questions the police might be able to answer soon. Story to be continued.