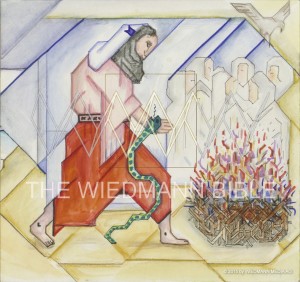 Printing the Holy Scriptures is considered being illegal? Well not anymore but in old colonial America it was. The British government regulated the printing in the English language very strictly. ThereforeBibles had to be imported from Britain. One was only allowed to print it if they had a license from the king. Those licenses, however, were only granted to three institutions: Oxford and Cambridge University press and a printer in Scotland.

The war with Britain resulted in a shortage of the James Authorized Version. So it was difficult for Christians to read the Bible. Eventually Robert Aitken, a Philadelphia printer, was the first one to publish a Bible in the English language in the newly formed United States.

Robert Aitken’s “Bible of the Revolution” is considered to be one of the rarest books. There are only a few existing copies left.  In 1940 Rev. Edwin A.R. Rumball-Petre recorded that a total of 71 copies were located.

Today you can find copies of the “Bible of the Revolution” in the among others in the American Bible Society’s Museum of Biblical Art in New York and the Houston Baptist University’s Dunham Bible Museum.

Luckily it was not illegal for Willy Wiedmann to create the World’s Longest Painted Bible. 3,333 hand-painted pictures in a 1 mile long Leporello. It goes beyond what Martin Luther dreamed an illustrated Bible should be, and beyond what so many others have tried to achieve. The Wiedmann Bible Film: