Murder, homicide, torture, and much more. Sounds like a story for a good, scary thriller. However this book has been written a long time ago and is the most-read book in the world:

The Bible. If one took the Holy Scriptures literally it would be a very gruesome story. Even more: one would engage in self-mutilation. Take Markus 9:42-48. Christians are being told to cut their hand or foot off or pluck out their eye.  Or Matthew 5:38 says: “You have heard that it was said, ‘AN EYE FOR AN EYE, AND A TOOTH FOR A TOOTH.'” 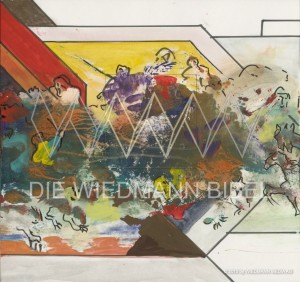 Who would do that? The German author Mario Urban did when he wrote his book “Pulp Christian” (available in German). However, in some of his hand-painted pictures Willy Wiedmann took the Bible literally as well. He portrayed some of the books as written in the Old Testament.

Nevertheless the Bible has side that one should take literally take for example the Sermon on the Mount:

“You have heard that it was said, ‘Eye for eye, and tooth for tooth. But I tell you, do not resist an evil person. If anyone slaps you on the right cheek, turn to them the other cheek also. And if anyone wants to sue you and take your shirt, hand over your coat as well. If anyone forces you to go one mile, go with them two miles. Give to the one who asks you, and do not turn away from the one who wants to borrow from you.” (Mathew 5:38-42)

What do you think? Should we take the Bible literally?