A 60 hour work week, constant traveling, and attending social events. For many this it today’s reality. People pay thousands of dollars to learn how to manage their work life balance. Willy Wiedmann was a natural!

Just to list some of the things Willy Wiedmann accomplished in life:

– he played Jazz among others with Louis Armstrong and Ella Fitzgerald

– ran six galleries, and exhibited his works of arts in museums nationally as well as internationally 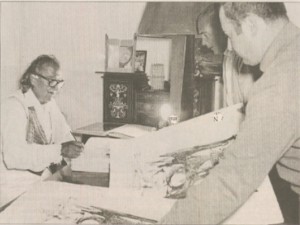 – created at least 8 aliases including their vita. Even some journalists bought his stories and announced that i.e. Emilio Graesli, the artist, would be present his exhibition. Ironic because he did not exist.

– invented the art of „Polycon Painting“

– and last but not least brought the world’s longest painted Bible „The Wiedmann Bible“ into existence.

You might wonder if he had a social life at all. He did! Willy Wiedmann was well known in Stuttgart, especially in Bad Cannstatt. 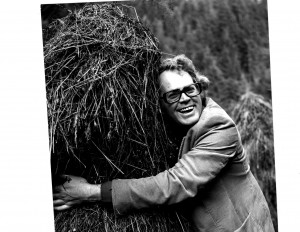 He hosted various cultural events and was even awarded the Cross of the Order of Merit of the Federal Republic of Germany for his work in the service of art and culture. It was the art that gave him the energy. Unfortunately he died in 2013 at the age of 84. However, his artistic legacy lives on through his life’s work: